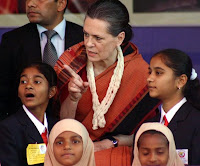 Rashtriya Bal Swasthya Karyakram (RBSK) is official launched by Congress president Sonia Gandhi on 6th February 2013 at Palghar in Maharashtra’s Thane district. Rashtriya Bal Swasthya Karyakram (RBSK) is an initiative of Child Health Screening and early intervention service.
The initiative aims to provide a comprehensive healthcare package for all children up to 18 by conflating earlier programmes where children up to six years of age were examined in anganwadis by a medical officer, while those from six to 18 years were covered under the School Health Programme.The programme would soon be extended to all districts of the country in a phased manner. This ambitious scheme, when implemented, is expected to benefit approximately 27 crore children across the country.As part of the programme, District Early Intervention Centres are to be made operational in all districts to treat cases referred from block levels. Tertiary health services would also be made available for cases requiring surgery.