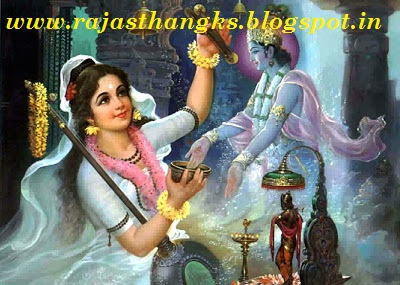 Main Characteristics of Bhakti Movement:
One chief characteristic of the Bhakti movement can be mentioned as belief in one God. A devotee could worship God by love and devotion. The second characteristic of the Bhakti movement was that there was no need to worship idols or to perform elaborate rituals for seeking his grace. The third feature on which the Bhakti saints laid stress was the equality of all castes. There was no distinction of high or low as far as the devotion to God was concerned. The fourth feature was the emphasis, which these saints laid on Hindu-Muslim unity. According to these saints all men irrespective of their religion are equal in the eyes of God. The saints preached in the language of the common people like Rajasthani, Khadi and other local language. They did not use Sanskrit, which was the language of the cultured few. These saints laid stress on purity of heart and practice of virtues like truth, honesty, kindness, and charity. Some saints regarded God as formless or Nirguna while others consider him as having different forms or Saguna. Most of Bhakti Movement saint in Rajasthan are of Saguna Bhakta.
Important Bhakti Saints of Rajasthan:
1. Dadu Dayal
2. Sundar das
3. Meera Bai
4. Bhakhan
5. Wajind
6. Raghavdas
7. Lal Das
8. Charan Das
9. Movaji
10. Khwaja Moinuddin Chisti
Posted by sk choudhary at 8:53 PM