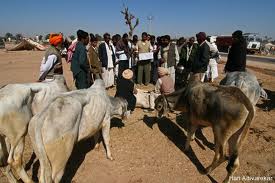 Nagaur Fair or Ramdevji Cattle Fair 2013 or Pashu Mela 2013 will begins from 17th February 2013. This eight-day fair held every year during the month of January - February, is popularly known as the cattle fair and is the second largest in Rajasthan. Nagaur Town is the most picturesque of Rajput townships. The town becomes a sea of animals, trading over 70,000 bullocks, camels and horses every year. The bullocks are known for their fleetness. Not only are the animals lavishly decorated, even their owners flaunt their colorful turbans and long moustaches. From shearing sheep to handsome marwari horses to spices all compiled in one fair. Attractions include the 'mirchi' bazaar (largest red chilly market of India), wooden items, iron-crafts and camel leather accessories.
Sports like tug-of-war, camel races, bullock races and cockfights; jugglers; puppeteers, storytellers; and exciting campfire evenings are held to entertain the tourists. Folk music of the Jodhpur variation echoes the tranquil desert sand. Nagaur is well connected to the major cities by road and rail. Nearest airport is Jodhpur, some 135 kms away.
Posted by sk choudhary at 9:17 PM