Bhangarh is a town in India that is famous for its historical ruins. It is in the Rajgarh municipality of the Alwar district in the state of Rajasthan. Bhangarh is situated near Sariska Tiger Reserve of Rajasthan. Bhangarh Fort is known as "Bhooton ka Kila or Fort of Ghost" which makes it one of popular tourist attraction. Bhangarh is said to be one of the Top 10 most haunted places in India. Legends says that there are ghosts in Bhangarh and that is why entry is prohibited for tourists in the fort after sunset and before sunrise. 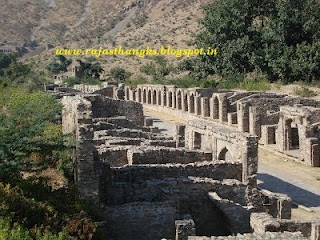 There are various stories related to Bhangarh fort. According to legend, the city of Bhangarh was cursed by the Guru Balu Nath. He had sanctioned the construction of the town on one condition, "The moment the shadows of your palaces touch me, the city shall be no more!" When a descendant prince raised the palace to a height that cast a shadow on Balu Nath's forbidden retreat, he cursed the town. Balu Nath is said to be buried there to this day in a small samādhi. while another story is related to Princess Ratnavati of Bhangarh. On her eighteenth birthday she began to get offers of marriage from other regions. In the area lived a tantrik, a magician well versed in the occult, called Singhia, who was in love with the princess but knew that the match was impossible. One day Singhia saw the princess's maid in the market, he used his black magic on the oil she was purchasing so that upon touching it the princess would surrender herself to him. The princess, however, seeing the tantric enchanting the oil, foiled his plan by pouring it on the ground. As the oil struck the ground it turned into a boulder, which crushed Singhia. Dying, the tantrik cursed the palace with the death of all who dwelt in it.
Watch VIDEO of  "भूतों का किला"/ Bhooton ka Kila, Bhangarh on YOUTUBE