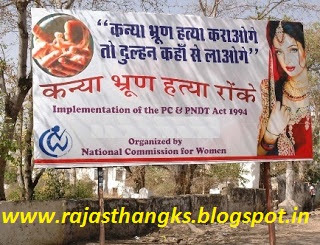 Social issues for Women in India & Provision in Constitution of India:

1. Woman Reservation Bill: Women's Reservation Bill or the The Constitution (108th Amendment) Bill, is a pending bill in India which proposes to amend the Constitution of India to reserve 33% of all seats in the Lower house of Parliament of India, the Lok Sabha, and in all state legislative assemblies for women. The seats to be reserved in rotation will be determined by draw of lots in such a way that a seat shall be reserved only once in three consecutive general elections.
Current Status: The Upper House Rajya Sabha passed the bill on 9 Mar 2010. As of March 2013, the Lower House Lok Sabha has not yet voted on the bill108th amendment, 33% reservation in Lok Sabha & All Vidhansabha of States
2. PC & PNDT Act 1994:  Pre-natal Diagnostic Techniques (Regulation and Prevention of Misuse) Act, 1994 to curb this practice and brought into operation from 1st January, 1996. PNDT Act and Rules have been amended keeping in view the emerging technologies for selection of sex before and after conception and problems faced in the working of implementation of the ACT and certain directions of Honorable Supreme Court. These amendments have come into operation with effect from 14th February, 2003.
As per PC & PNDT Act 1994:
A. No Genetic Counseling Centre, Genetic Laboratory or Genetic Clinic unless registered under this Act, shall conduct or associate with, or help in, conducting activities relating to pre-natal diagnostic techniques.
B. No Genetic Counseling Centre, Genetic Laboratory or Genetic Clinic shall employ or cause to be employed any person who does not possess the prescribed qualifications;
C. No medical geneticist, gynecologist, pediatrician, registered medical practitioner or any other person shall conduct or cause to be conducted or aid in conducting by himself or through any other person, any pre-natal diagnostic techniques at a place other than a place registered under this Act
3. Protection of Woman from Domestic Violence Act 2005: An Act to provide for more effective protection of the rights of women guaranteed under the Constitution who are victims of violence of any kind occurring within the family and for matters connected therewith or incidental thereto. The Protection of Women from Domestic Violence Act 2005 differs from the earlier law, Section 498A of the Indian Penal Code, in that it explicitly defines domestic violence in addition to dowry-related cruelty. omestic violence is defined as follows:
For the purposes of this Act, any conduct of the respondent shall constitute domestic violence if he:
(a) habitually assaults or makes the life of the aggrieved person miserable by cruelty of conduct even if such conduct does not amount to physical ill-treatment; or
(b) forces the aggrieved person to lead an immoral life; or
(c) otherwise injures or harms the aggrieved person.
4. National Commission for Woman: The National Commission for Women was set up as statutory body in January 1992 under the National Commission for Women Act, 1990 ( Act No. 20 of 1990 of Govt.of India ) to :
A. review the Constitutional and Legal safeguards for women ;
B. recommend remedial legislative measures ;
C. facilitate redressal of grievances and
D. advise the Government on all policy matters affecting women.
In keeping with its mandate, the Commission initiated various steps to improve the status of women and worked for their economic empowerment during the year under report.  The Commission completed its visits to all the States/UTs except Lakshdweep and prepared Gender Profiles to assess the status of women and their empowerment.  It received a large number of complaints and acted suo-moto  in several cases to provide speedy justice.  It took up the issue of child marriage, sponsored legal awareness programmes,  Parivarik Mahila Lok Adalats and reviewed laws such as Dowry Prohibition Act, 1961, PNDT Act 1994, Indian Penal Code 1860 and the National Commission for Women Act, 1990 to make them more stringent and effective.  It organized workshops/ consultations, constituted expert committees on economic empowerment of women, conducted workshops/seminars for gender awareness and took up publicity campaign against female foeticide, violence against women, etc. in order to generate awareness in the society against these social evils. Rastra Mahila .. newslatter published By NCW in Hindi as well as English.
5. Constitutional Provision for Woman:
Article 14: Equality before law
Article 15: Prohibition of discrimination on grounds of religion, race, caste, sex or place of birth
Article 16: Equality of opportunity in matters of public employment
Article 21: Protection of life and personal liberty
Article 23: Prohibition of traffic in human beings and forced labour
Article 39: Certain principles of policy to be followed by the State
Article 42: Provision for just and humane conditions of work and maternity relief


Article 45: Provision for free and compulsory education for children
Posted by sk choudhary at 8:47 AM